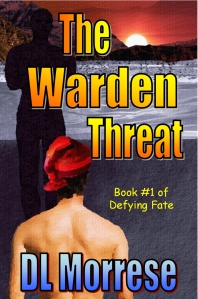 See my new review of The Warden Threat here: http://katepolicanisreviews.wordpress.com/2012/02/10/the-warden-threat-by-dl-morrese/

Or you can just go buy it here:

Excerpt from the book:

From the back of his mount, Donald saw another group of peasants gathering this year’s potato crop from the dry, cracked soil. Sweat dripped from their greasy hair and stained their worn and patched clothing. “Find out about the commoners,” his mother had told him. “They are our people and it is our duty to see to their needs.” What many of them needed most, an involuntary thought suggested, was a bath, and he immediately felt guilty for it. The Faith taught that the gods determined the fate everyone. If this was so, these peasants could no more change their role in life than he could, as much as he might like to, and he felt guilty for this thought as well.

The people toiling in the field to the right of the dust covered road looked up briefly as Prince Donald and his guide passed. The prince lifted a gloved hand to wave in what he thought was a regal manner. A young girl waved back briefly before returning to her knees, plunging her dirt covered hands into the soil.

His guide stopped unexpectedly after another mile and stooped to examine the road. Donald reined in his serviceable but otherwise unimpressive mount. “What do you see, Kwestor?”

The ranger replied in a slow monotone. “Dirt, mostly. And a pair of wheel ruts.” The older man’s heavy, well-traveled cloak hung limply on his shoulders in the still air, hiding his movements from his current employer. “Probably a farm wagon but I could make up something more exciting if it would make you feel better.”

This wasn’t the first time Kwestor teased him about his not so secret desire for adventure. Donald wasn’t naive enough to think they might encounter dragons or evil wizards. He knew the stories in his library back at the castle were fiction but he still held out some hope for the possibility of finding a damsel in distress in need of rescue by a brave and heroic prince. Just once would be enough. Then he could go back to Greatbridge and fulfill his duty as the nominal head of whatever noble cause the queen might find worthy of the third son of a king.

Without standing, the scout looked up from the road, held up two fingers and motioned to the right toward a thick patch of woods.

“What is it?” Donald asked anxiously. “Are there two brigands waiting ahead in the woods?”

“No”, Kwestor replied without turning. He drew out the single word, delivering it slowly and deliberately, his voice hinting at some underlying sadness or perhaps disappointment. “I’m going over there to take a poop.”

The staggeringly mundane nature of what the man said shocked the prince for a moment. A simple statement about an act so routine it was seldom commented upon smashed through the prince’s worldview like a brick through a stained glass window. He found himself lost for words but felt he must make some sort of reply. Eventually he blurted out, “You’re a rather crude man aren’t you?”